How diagonal is your network? Part 2

The story: where we have left it?

In part 1 of this posts series on network diagonality we wrapped up by writing two functions that compute the raw and normalised diagonality for a specific representation of a network in terms of its adjacency matrix.

The functions rely on the notion of distance from the diagonal for the entry of a square matrix.

Importantly, we identified three things we’ll need to take care of moving into the realm of rectangular matrices.

The diagonal distance we defined in part 1 is based on the notion that the straight line defined by $y-x = 0$ (that is, $y = x$), in the finite geometry of the matrix entries coordinates, is indeed the matrix diagonal.

That’s not so simple in a bipartite network where the numbers of rows and columns differ. Entries Aᵢᵢ in the adjacency matrix of a bipartite network do not have any special meaning because the left ᵢ and the right ᵢ refer to two different set of species (taxa, individuals, or nodes in general). Thus, the usual definition of diagonal is not much relevant.

Well, no biggie. We can still go back to elementary school and draw a diagonal in a rectangle. Let capital $I$ be the number of rows and capital $J$ be the number of columns in the matrix. We can write an equation for the diagonal modifying the square one. Roughly speaking, the diagonal will be the line for which $\frac{J}{I}x - y = 0$. Or, that should be the same $Iy - Jx = 0$ (that is, $Iy = Jx$). For each step in the $x$ direction, we go a $\frac{J}{I}$th of a step in the $y$ direction. And because we are working with a discrete geometry (the entries of the adjacency matrix), we will need to round it up to integer values. Or take the ceiling, or the floor.

One would hope that this somewhat equivalent expression versions of the diagonal would be mathematically equivalent and give the same scores. Spoiler, they don’t. Remember: things are weird in rectangular world.

And they do look like what we would expect. Let’s consider a 50×70 matrix. 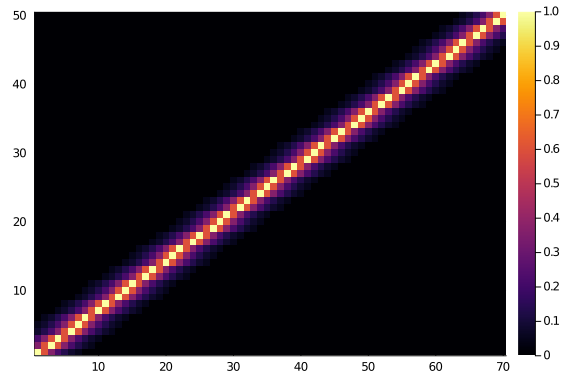 And, if we look at a 70×50 matrix we will surely see the same thing, as symmetry and beauty and order. Right? 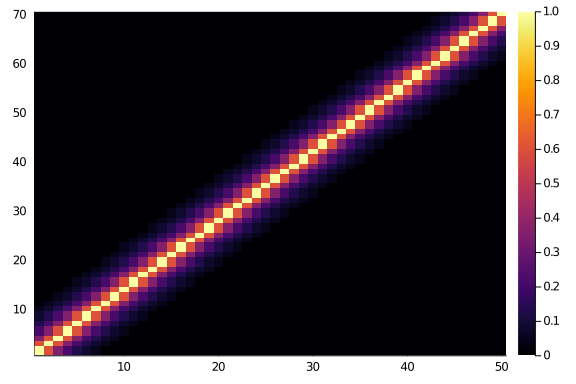 Ok, well, maybe it’s just a glitch, let’s see side by side, and maybe with a smaller matrix 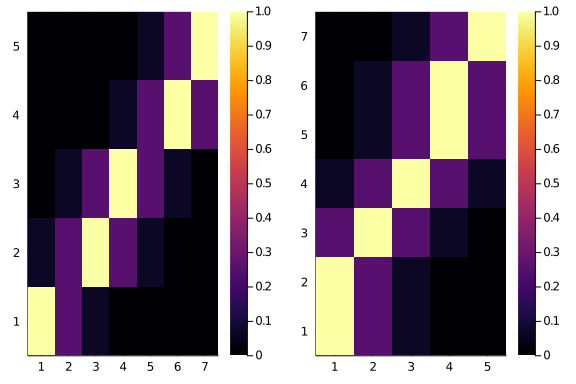 Oh nooo. That’s even worse. The two score matrices are not the same. Do they have, at least, the same total scores?

No, they do not. And that’s that. We can try to do better, maybe by using some fancy function. I spent some hours looking for some ingenious trick, and failed. The fanciest I got was using the geometric mean of $I$ and $J$. The geometric mean! 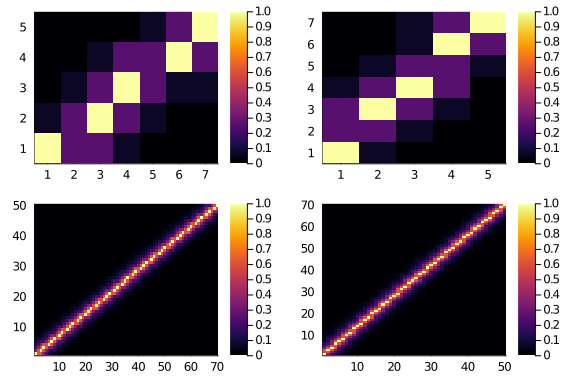 And should be (more?) symmetric.

If you do better than this, please let me know!

For a blog post, is enough, I reckon: Problem 1 is fixed

So, how many entries can get the maximum score (and the other scores)? In the square world, it’s easy. If you have N species, then N entries in the greater diagonal, 2×(N-1) for the entries a step away, 2×(N-2) for the ones one step further, and so on.

It’s NOT so easy, and it depends on the fine details of the problem, for the rectangular world. The exact matrix dimension and the diagonal distance function we use matters.

Too lazy to figure out an analytic a priori solution, we just count.

Don’t you also find upsetting that adding 1 rows adds 9 maximum score entries? Yes, yes you do. We hate it, for good reasons. But, ok, as long as Julia does the counting, who cares.

The next step requires to fill in the available entries with the links present in the network.

To compute the score normalization we need two things: the number of links, and the counts of the score values.

Now, from the adjacency matrix A of a network N, we can get all the necessary information bits to compute the maximum possible diagonality score.

Let’s try on a real ecological bipartite network, for example, this host-parasite network:

We obtain it from the Web of Life and convert it in a network.

The network adjacency show some diagonal structure, but not an awful lot. 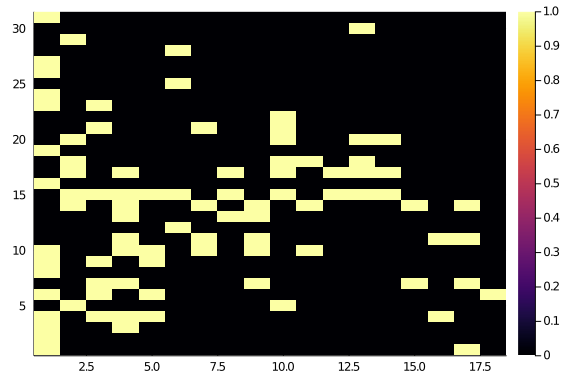 Let’s compute the normalized diagonality for the network.

Or for the butterfly and moths network:

We can define a function doing this job for us.

Great, and it does not just work for the bipartite networks: it works also for rectangular ones for free.

So, can we set out to see how diagonal the world of ecological nets is?

We don’t want that. We want the score to be independent of any arbitrary decision we took when representing it as an adjacency matrix. That is, we want it to be an intrinsic graph property.

But all our code depends on this order, and I’ve no idea how to compute the score not relying on a particular matrix representation (any idea? it may well be the case that this is actually possible!). Thus, we are going the lazy way, and brute force our way through.

In particular, we are going to use some crude simulated annealing to compute the maximum diagonality score between all the possible representations of our observed networks in terms of adjacency matrix.

The base idea here is to swap rows and columns until we get to a better result. With a bit of lucky, and a bit of randomness, we can get to the maximum (or close to it).

One thing to notice is that when we shuffle the order of rows and columns certain things stay the same. The matrix of diagonal scores depends only on the size of the observed matrix, α, and k; the normalization factor depends on then value count of the matrix of diagonal scores and the number of links in the observed network. Thus, we don’t need to recompute this objects every time we reshuffle the network. Let’s write a slightly more convenient normalized_diagonality then:

Now, annealing! Here I rely heavily on some Timothée and Tanya’s code from a forthcoming paper.

This tiny monster of a function gets a network and some parameters as input and return the most diagonal representation of that network. We can see it in action on our bipartite ecological network: 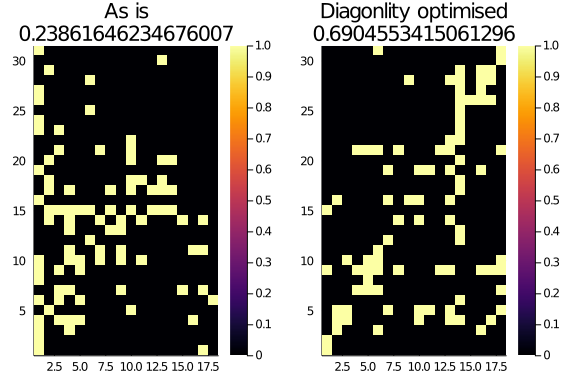 We are almost there. The only remaining risk is that the optim_diag function can get stuck in local optima. To avoid that, instead of running it just once, we run it a few times, reshuffling the observed network before each time.

Wrapping everything up for bipartite networks:

Warning, this does take a while. Probably there is ample space for code optimization.

Following the insight about the role of k and α from Diagonality part 1, we may want to scale them so that the diagonal scores are not too tight around the diagonal in larger networks. An heuristic may be to scale k with the log of the network richness.

(Note to self: the previous step is massively parallelisable, so, do that!)

Yay! We can finally plot a diagonality distribution 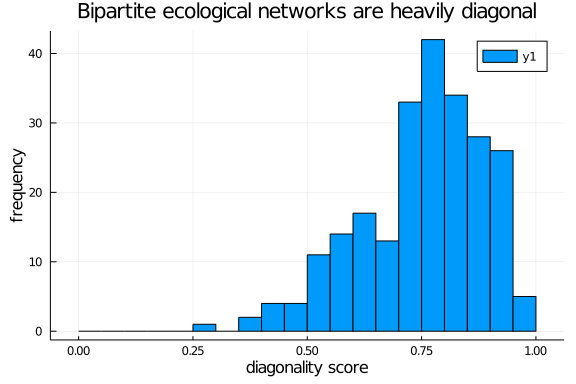 and explore how diagonality is distributed across other network properties, such as the number of species in the web: 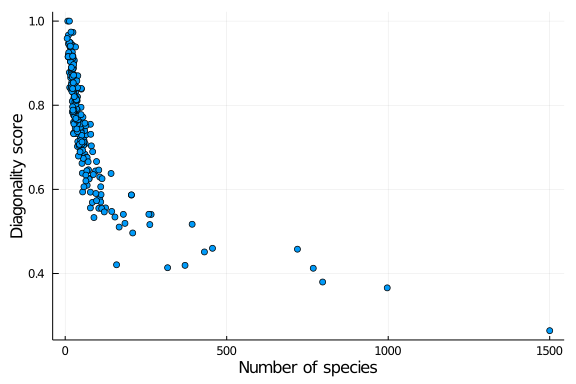